Say to someone anywhere in Puerto Vallarta that you’ve found the absolute best Taco on Banderas Bay and you will start a war. Everyone, in this taco heaven has their favorite one and their favorite place.  It’s really amazing that the simple taco has so many ardent fans but not when you taste some.

Like a sandwich, 2 slices of bread with something in it, a taco is as basic as it can get. A round of masa de maiz, or harina (flour) pressed into a tortilla, the foundation of all Mexican cuisine, then quickly baked on a hot metal surface and filled with something. Something delicious.

If you’re a vegetarian do not despair. You can find tacos stuffed with nopales, (cactus paddles,) potatoes, roasted poblano peppers, squash blossoms even huitlacoche, (corn fungus), that is like a Mexican truffle. To me, and my hungry taste buds, all of them are just another reason to fall madly in love with this lovely place on our beautiful bay.

Many food historians say the Taco originated in the silver mines of Mexico in the 1900’s, as a handy way to eat something you could hold in your hand. They say the name came from the taco’s shape, like the explosives charges they used to blow the silver out of their holes. That makes sense, because the truth is, tacos are dynamite.

Linguists tell another story. According to them the word Taco comes from the ancient indigenous Nahuatl language. Their word was Tlahco, meaning half or in the middle, as in something placed in the middle of a corn tortilla. It seems that along with the other wonders these people discovered, including a calendar as accurate as anything that exists today, the number zero, the ability to predict eclipses and the rotation of the cosmos on 26,000 year cycles, the humble taco stands high up in their contributions to civilization.

Bernal Diaz del Castillo, a soldier who traveled with Cortes wrote about a feast given by Cortes in Coyoacan, Mexico where only tacos were served. Perhaps it wasn’t just the lust for gold that led to the conquest of Mexico but the lust for those handfuls of heaven that Mexicans as well as the rest of the world gobble up in record numbers. 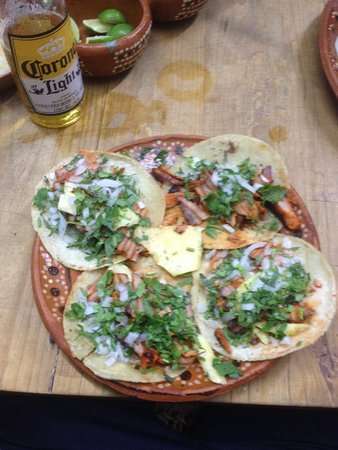 I did a little digging and dug up the fact that Mexico consumes over 50 million tacos each and every day and I’m guessing that all those millions of Mexicans all have a favorite place. It doesn’t take much to open a taco stand. A little charcoal, some masa, a selection of fillings and some sauce to dip it in. When we’re done, I will tell you the little place that got the most votes and not by a lot.

Another little thing that grew out of these cultures was corn itself. Many do not know it, but corn does not exist in nature. It is a genetically engineered plant that somehow these ancient peoples figured out how to create from wild grasses. That is one thing I still can’t wrap my head around. How did these ancient people ever figure out how to do that? But, it’s a good thing they did. Without corn there would have been no tortilla, or taco or maybe even no Mexico.

Lately I’ve been wondering if the humble taco will follow the pizza into the realms of the epicurious. Will someone like Wolfgang Puck glam up the taco? Beluga and creme fraise, lox and cream cheese for lonely New Yorkers, roast pork fried rice, sashimi and roe. Foie Gras? I hope not. But one thing I am sure of, as long as there are hungry people with an open hand and an appetite, the taco, just as it is, will always reign supreme.

Ok, my anxious friends, let’s stop talking and start eating. The winner, this time around was Pancho’s Takos, behind the Chedraui on the way to Nuevo Vallarta. They open at 6 and it’s an authentic place that is great except for one thing. No A.C. so, put on your shorts.

My partner Dave and I put together our bestofbanderasbay.com website to help you find the best of everything around the bay. Come share it all with us, but not our tacos.

Sign up here to stay updated
about the Banderas Bay area.